The print media industry is pushing the walls of hall 2

C!PRINT LYON IS FORGING ITS WAY TO SUCCESS ACCORDING TO THE MAJOR COMPETITORS IN THE PRINTING INDUSTRY. FOR THE 2018 EDITION, KONICA MINOLTA HAS CONFIRMED ITS PARTICIPATION. THE TRADE SHOW WILL ALSO HOST THE BRAND RISO, WITH AN 80 M2 STAND.

Konica Minolta has returned to C!Print Lyon. After a short run concluding in 2016 with a 21 m2 stand, the Japanese group confirms its love for the trade show. The company has just signed a 140 m2 stand for 2018.

THE MARKET’S MAJOR COMPETITORS WILL BE IN LYON 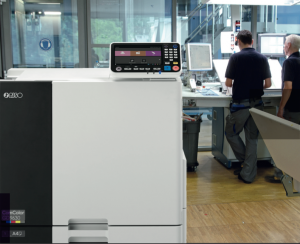 Riso France, headquartered in Lyon, has also decided to reach a milestone this year. The No.1 subsidiary of the Japanese group Riso Kagaku will participate in C!Print Lyon with a stand of 80 m2. They will come to showcase their inkjet technology, unique on the market. Its cold printing technology offers high performance production printing services, while being environmentally friendly thanks to its extremely low energy consumption. Among the novelties to be presented at the trade show, we find the new ComColor GD series, which was announced at the 2016 Drupa and which will finally be available. This new war machine has been designed to achieve high-volume printing, as well as an optimized colour rendering by adding a fifth colour, grey, in addition to the CMYK inks.

« At C!Print, our goal is to meet print communication professionals and contractors, printing centres, local authorities, etc. We chose C!Print because it is here that we find all the major competitors in our business today and we wanted to participate in this dynamic », explains Caroline Garadier, Head of Communications at Riso France.

WITH THE ARRIVAL OF EXHIBITORS SUCH AS KONICA MINOLTA AND RISO, C!PRINT CONFIRMS THE RELEVANCE OF ITS POSITION BASED ON “THE ADDED VALUE OF PRINT”.